Zhambyl Zhabayev. Photo credit: Bilimdinews.kz.
Zhambyl Zhabayev (Photo) is not only a great Kazakh poet, he has become almost a mythical figure, uniting very different eras. Even his lifespan is unique: born in 1846, he died on June 22, 1945 – a few weeks after the defeat of Nazism in Germany. He only had eight months to live to celebrate his 100th birthday, his centenary, writing Dmitri Babich in Independence of Kazakhstan: 30 years, Op-Ed.

We are now celebrating its 175th anniversary.

Zhambyl, who was born only four years after the death of Mikhail Lermontov and nine years after the death of Alexander Pushkin – the two great Russian poets. To feel the distance, it suffices to say that their images were brought to us only by painters – photography did not exist at the time of their untimely deaths in bloody duels. Zhambyl breathed the same air with them…

But Zhambyl is also the indispensable memory of the childhood of our fathers, the evergreen “father figure”, who seemed so close, therefore “one of us” not only thanks to numerous photos in the newspapers. But above all – thanks to its magnificent, but also easily understandable verses about Kazakhstan, its nature, its people. But not just about the homeland – singing from the heart of Kazakhstan, Zhambyl found a way to respond to the tragedy of WWII, the blockade of Leningrad and many other tectonic “history changes” that have took place during his lifetime.

The living room of the Zhambyl Zhabayev museum, located 70 km from Almaty where the poet lived in 1938-1945. Photo credit: Yvision.kz.

Could someone link these two worlds – Kazakhstan before its “Tsarist period”, the Pushkin and Lermontov era, – and our generation, which saw the end of the Soviet Union and the success of independent Kazakhstan? ?

There is only one of these characters – Zhambyl.

It is astonishing that his worldwide fame reached him around 1936, when he was 90 years old. “You are never too old to learn” is a reassuring statement. But “you are never too old for the glory” is even more reassuring. Zhambyl rose to fame in 1936, when a Kazakh poet Abdilda Tazhibayev nominated Zhambyl for the post of “wise old man” of the Soviet Union (aksakal), a niche traditionally occupied by aging poets from the lands of the Caucasus. Zhambyl immediately won the contest: he was not only older (his competitor from Dagestan, Suleiman Stalski, was 23 years younger), Zhambyl was certainly more colorful. Raised near the old town of Taraz (later renamed after Zhambyl), Zhambyl had played dombura since the age of 14 and won local poetry contests (aitys) since 1881. Zhambyl wore traditional Kazakh clothing and preferred stick to traditional clothing rich in protein. regime of the steppes, which allowed him to live so long. But there was certainly something more to him – Zhambyl was indeed a poet. 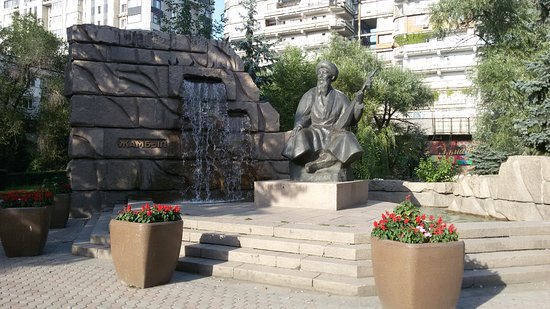 A monument to Zhambyl Zhabayev in Almaty.

Critics (and some detractors) accuse Zhambyl of writing “political poetry”, of being blinded by the power (which was not always right) of the Soviet Union. There is some factual truth to this claim, but there is no aesthetic truth to it. Léopold Senghor, the legendary first president of independent Senegal, also wrote political verses, including some on the “strength” and “power” of the political “strongmen” of the 20th century. But Senghor wrote these lines with sincerity – and it has gone down in the history of literature. And Senghor has gone down in history in a much more honorary position than the strong politicians, whom he admired.

For Zhambyl, the people of Leningrad (now Saint Petersburg) who suffered a terrible famine during the Nazi siege of their city in 1941-1944, – they were indeed his children. In his verses, Zhambyl felt pain for each of the more than a million starving people in this majestic Imperial City on the shores of the Baltic Sea, whose palaces and bridges were so far removed from him. For poetry, distances don’t matter. It’s the emotion that counts. And Zhambyl had strong emotions. You can feel it by reading his verses from a 95 year old man:

For you – apples, sweet as the best wine,

For you – horses of the best breeds,

For your, fighters, your most urgent needs …

(Kazakhstan was famous for its apples and horse-breeding traditions.)

Leningraders, my love and my pride!

Let my gaze slide across the mountains

In the snow of rocky ridges

I can see your columns and your bridges,

At the sound of the spring torrent,

I can feel your pain, your torment …

The famous Russian poet Boris Pasternak (1891-1960), whom Zhambyl might call a younger colleague, had great respect for the kind of popular poetry that Zhambyl represented, wrote about these verses that “a poet can see them. events before they happen “and poetry reflects a” human condition “in its symbolic core.

This is certainly true of Zhambyl. His long life and his work are a story of the human condition.